Having previously worked with a digital marketing agency, this popular Restaurant found themselves spending $5000 per month, with no further information shared on where the money went or what had been gained through the digital marketing campaign. Because of this, the Restaurant owners felt that they weren’t receiving value for money and that they were missing out on invaluable market information. 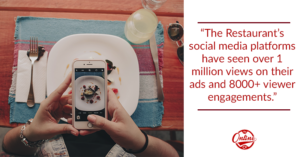 James and his family are long-time fans of this popular Restaurant chain and when they realised a store had opened in their local area and they hadn’t even heard about it, they contacted the company, to offer their services. Soon after, TheOnlineCo. was engaged to manage the Restaurant’s social media accounts, both organic and paid and has since implemented the use of chatbots, lead generation ads, awareness ads and specials promotions.

Each month, the Restaurant receives a detailed report from TheOnlineCo. outlining what has happened in their campaign throughout the previous four weeks, where advertising dollars have been spent and valuable information about their target audience.

As a result of this campaign, the Restaurant has seen an increase in voucher redemption, driving customers to the store to make purchases. The Restaurant’s social media platforms have seen over 1 million views on their ads and 8000+ viewer engagements since TheOnlineCo. began managing the account.

Where to Start with Digital Marketing?

Marketing used to be a fairly simple procedure. It looked like knocking on a door…

If you're new to the SWOT framework, here's a quick introduction. SWOT is a tool…