Despite being situated on some of Australia’s best real estate, this Surf Club was struggling to fill bookings for their function hall. Their community engagement was low and online presence was zero. 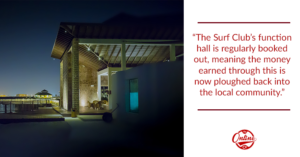 When James contacted the Surf Club and offered to help, they jumped at the chance. TheOnlineCo. team set about applying for a $10 000 Google Grant which the not for profit Club received. Grant money is now being used to build a solid digital marketing campaign and online presence.

Thanks to the landing pages built by TheOnlineCo. team, the Surf Club’s function hall is regularly booked out, meaning the money earned through this is now ploughed back into the local community. The first three weeks of the campaign saw 12 leads come through via email and another dozen over the phone. Previously, the Surf Club was receiving a maximum of 1 or 2 enquiries per week.

Where to Start with Digital Marketing?

Marketing used to be a fairly simple procedure. It looked like knocking on a door…

If you're new to the SWOT framework, here's a quick introduction. SWOT is a tool…